A narrative-driven tabletop roleplaying game that uses chess instead of dice. You are two neighboring countries in conflict.  One by one, different parts begin to move, and tell their share of a bigger story. For 2 players (or more in teams).

In order to download this game you must purchase it at or above the minimum price of $5 USD. You will get access to the following files:

Support this game at or above a special price point to receive something exclusive.

Claim a free copy of Chess: Two Kingdoms  if you are marginalized/in need.

Aaronsxl339 days ago(+2)
Chess: Two Kingdoms is, at its heart, a game that turns an ordinary game of chess into a vehicle for storytelling.

Easy to read and easy to play, Two Kingdoms is a fun and innovative spin on one of the oldest games in history.

Played this on stream for a charity stream and had a blast. Even if you aren’t great at chess like me, the prompts can drive such an interesting story, and the narrative prompts themselves reframe the act and context of playing chess in a fascinating way. Thank you so much.

This is sort of a narrative overlay that goes on top of a chess game, plus some safety tools and advice.

On the subject of safety tools, I'm not sure I personally dig the Fire List mechanic, where you write down stuff that could cause you flashbacks or trauma on public list before the game, but I don't think its intention is bad. It's also easy to swap the Fire List out with X-Card or something else that's reactive instead of predictive if you feel the same way.

As far as the narrative overlay, it's both flexible and quite detailed. You *are* telling a story of two organized forces in conflict, but those forces can be anything you care to define. The specific pieces on the board can correspond to specific characters in the story, but they also broadly represent social groups and factions within the two forces, and via the book's system each movement ends up kind of rich with context.

For example, a pawn advances. The lowest-level members of one of the forces are now engaging in some way with the growing conflict. The pieces they have moved away from, they are now more physically or ideologically distant from. The pieces they have moved towards are now occupying more of their thinking. All of this is bundled up into a coherent piece of story, and that's a turn.

There's even specific guidance for particular situations on the board. For example, if a pawn takes a pawn en passant or the king castles.

It's a really cool concept and the writing is excellent, although chess is so direct and counterplay-focused that the storytelling layer seems an odd match.

Overall, I think I'd recommend Two Kingdoms to anyone who likes longer form narrative games or stories of escalating conflict. My first instinct would be to go for some sort of Gundam style narrative, so fans of geopolitical robot conflicts may also be interested in this. 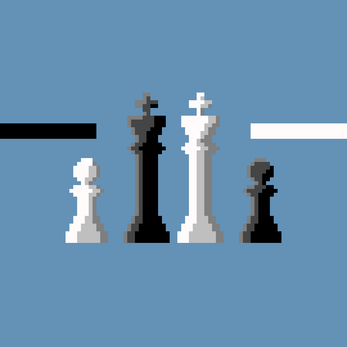